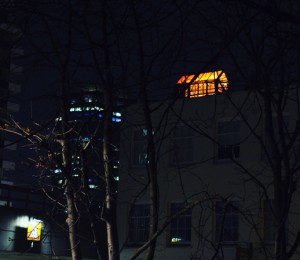 This winter Studios Dekka & Long in partnership with DSDHA Architects light up the Signal Box on VGCC’s roof with a fiery light reminiscent of a furnace.

Number 5, Glasshouse Walk, home to the VGCC, is a late 19th century building which belonged to the master builder, B.E Nightingale. However, it sits on the site of the Duke of Buckingham’s 17th and 18th century Glass Plate Works, an industry of international importance in Vauxhall at the time. The roof installation captures something of the light and heat that would have been a daily feature of the glass works as sand and coal were hauled from boats on the River Thames to create molten glass at extreme temperature.